This is a long (and therefore probably boring) post, so please feel free to scroll down and think of other things while you “read” my roundup! I saw a few blogs were doing a review of their year so I thought I’d join in!

So I traced what I wrote last year on Facebook… 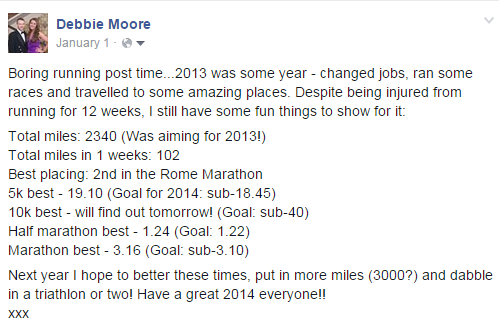 So I definitely got over the 3,000 mile mark this year, but by how much I’m not sure. My computer crashed a couple of months ago and I lost my spreadsheet where I keep track of things and kinda just went “meh I’ll track training in the New Year again”. So that’s that.

I haven’t really done a PB worthy half marathon course this year so my PB still stands from Feb 2013 (oops). Inverness would have been a great course to do it on back in March, but it was the day after a Michael Buble concert in Glasgow and a road trip the morning after a few cocktails and Buble wasn’t going to get me that PB…My best time this year actually ended up being in Lanzarote but I’m not going to count that one!

I think that my best run was the Edinburgh Marathon in May. I entered it the day after the Manchester marathon (coincidentally the deadline date) because I was disappointed with my (12 minute PB) time of 3.05. I’d trained for sub3 and I felt fit enough to do it. But the wind, along with my mental strength wasn’t there that day. Then, 3 weeks later, I did the Balmoral 5k and 10k within an hour of each other, and fell down my stairs that evening so spent my Saturday night in A&E (I was actually heading to Nicolle’s bday party – sorry I missed it again Colley!). I was in crutches for a few days, slowly came back to running, tried to be sensible, and another 3 weeks later I broke 3 hours!!

In amongst those races, I also won my 1st real race in the Stonehaven Half marathon (hills and wind must have been my forte that day!) as well as the Fare Challenge 10k (it was such a fun day!! Do it next year if you can!)

So the “dabble in a triathlon or two” mentioned above was a slight understatement. I always told myself if I broke 3 in the marathon, I’d get back in the pool and buy a bike. I just never realised it would happen so quickly (my 1st run was the Great North Run in September 2011 where I was a total novice; apparently holding a hand-held water bottle isn’t what real runners do in a 90min race…well, it took me 95 minutes that time!)

I called on my friend Max who is a bike expert to help me choose a bike, then when he left for a superstar job in London, I annoyed Noodles, Andy and Doug until they took me out for cycles. I learned so much from them and still have so much to learn! I also pestered Gordon who allowed me to swim with his speedy squad at COAST, where I have met some great people that keep me motivated and enjoy getting up at 5am 3 x per week!

So far, I have done 3 triathlons, won 3 triathlons (in course records), and have done 2 duathlons, winning 1 (the other being a DNF because of a technical issue) and have entered an Ironman (duh, otherwise this blog would make no sense.)

I have been so fortunate to be able to go away to so many places this year! At the start of the year I went to Berlin, then after Edinburgh marathon, I went on a girls’ trip to Turkey, then Barcelona/Salou, Lanzarote and Budapest! So far, next year will include Rotterdam in April (Kyle’s debut marathon – he will be PHENOMENAL), Ireland in May (my 1st half iron distance tri!), and Sweden in August! Hopefully I can throw in another training holiday somewhere (Doogz and Kyle were thinking Tenerife…Thoughts please people? For tri training??) and maybe a celebratory trip at the end of the year. Oh, and Hawaii? Let’s hope Hawaii.

Other awesome things that have happened this year are getting a great job as a contractor in a major oil and gas operator (fingers crossed the market picks up!), getting laser eye surgery (one of the BEST things I have ever done!), Kylie Babez moving in (I ❤ how Kirsty’s household now calls him Kylie Babez – sorry Kyle!), Mum getting engaged at Sleeping Beauty’s castle in Paris, and Emma ROCKING another lead role in the Pantomime this year! I have ALSO just found out one of my besties is pregnant, but I can’t reveal that just yet as it is a bit too early!! Aunty Deb is so proud as she will be the best Mummy ever!! 😉

Finally, my main goal for next year is to stay healthy! I was SO CLOSE this year to making it to the end without injury, but September and October ended up being write offs running-wise (I was so thankful I could still swim/cycle)! I want to get to every start line next year without any niggles!

I would also like to do well in the half distance I have entered in May. Between now and then I will really work on getting a cycling base so I can rock that race!

Running goals will take a slight back seat, but let’s make some time goals just for the bantz:

5k: break 18 (probably won’t happen as I can imagine there will be little speed work in Ironman training)

10k: break 37 – I think a 36-something would look great on a triathlon CV if my swim times were also considered

HM: get that 82 mins I was talking about last year