For those of who don’t know Fiona Brian (or RudBri as she is saved in my phone…Rudkin-turned-Brian), 1st of all where have you been?, and 2nd of all, she is one of the best runners in the country, with legs to die for! She is the friendliest, nicest and most modest person you will ever meet, so I will do the bragging for her!

She can kick my butt in running races (please don’t do a marathon!) and has such a great attitude! Plus, her over-use of exclamation marks makes us pretty much soul-mates. She is married to fellow speedster Tom Brian, and they were both over in Boston rocking the 5km and marathon last month! After everything that happened over there a couple of years ago, along with my interest from spending 3 months living in Massachusetts , I HAD to know EVERYTHING about their races! Fiona 1st, because she was FIRST NON-AFRICAN in the race!!!!!!!!!!!!!!!! She wasn’t even entered as an elite!!

Please read and be inspired by her race report, but ignore her use of “knicker shorts”…let’s call them “runderwear!” 😉

Whilst Debbie makes a speedy recovery to come back fitter and stronger than ever, she asked if we’d mind writing about our races in Boston last month.  I feel very honoured but can only apologise to the regular readers that this won’t be up to the standard you’re used to reading!

As part of my PhD, I spent a year living and working in Boston so when Tom got the marathon qualifying time in London last year, I couldn’t wait to go back!! 😀  Conveniently for me, the B.A.A also organise a top-class 5k race two days before the marathon attracting over 8000 runners from around the world so this seemed like a good opportunity for me to chase a big PB (and also feel like I’d done something when everyone else was running the marathon!).

We took the 6am flight from Aberdeen to Boston (via Amsterdam) on the Friday (the day before the 5k, 3 days before the marathon) so that we arrived in plenty of time for me to get sorted for the race on the Saturday (I like to be prepared and am known for turning up maybe unnecessarily early for races but I’d rather that than the other way around!).  We got into Boston early afternoon and got the T (underground) to our hotel which was right in the centre near the Commons.  The legs weren’t feeling very awake after the 7 hour transatlantic flight so we decided to head for a very brief and slow 2-3 miles in the Commons to help liven them up.  The rest of the afternoon was spent wandering around soaking up the atmosphere and planning where to eat later.  There was a real buzz to the city and it was all about running!  Nothing else was happening that weekend.  New Balance in particular had some pretty cool adverts up. 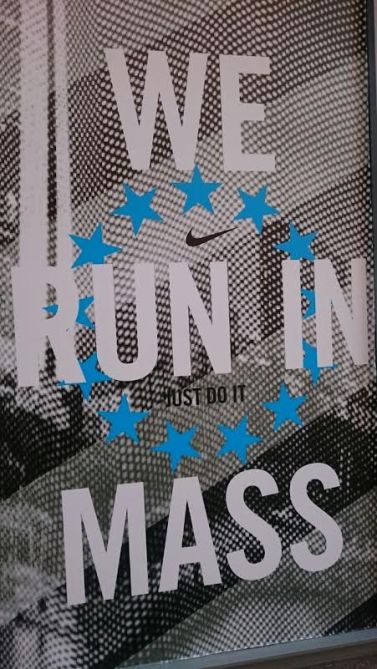 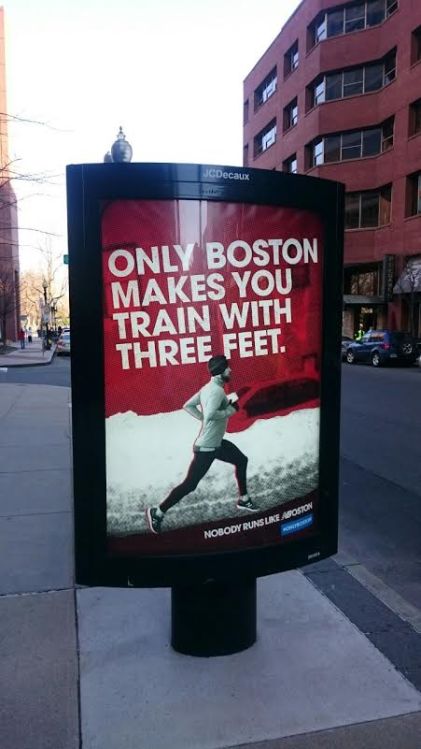 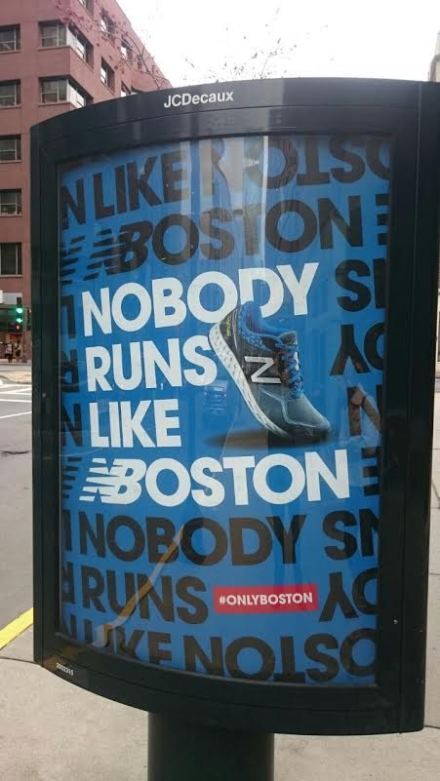 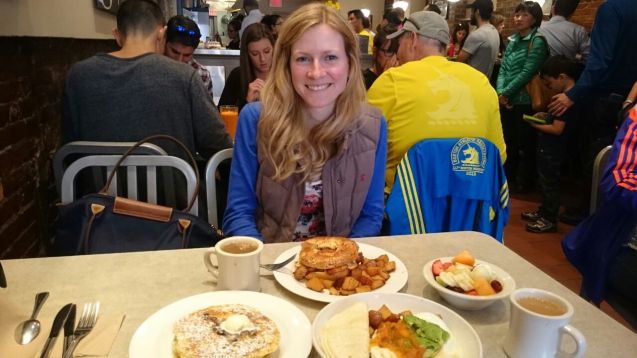 (Example of the amazing food!)

(A theme that I carried on throughout the holiday!!).  It turned out to be a great choice – spaghetti and meatballs – a classic pre-race dish!  With the jet lag, by 8.30pm we were pretty much asleep and as the race started at 8am the next day and I planned to be up at 5.30am, it made sense just to go to bed.  I was pretty full after the American-sized meatballs but needed to squeeze in some Cadburys Giant Buttons just to tick off another pre-race superstition (ideally it would have been Giant Buttons and chocolate raisins (preferably Sainsbury’s) but unfortunately I hadn’t had time to pick them up before we left! Obviously without these it meant that the race was going to be a disaster but somehow (probably the jetlag) I managed to put this thought out of my mind and get to sleep). 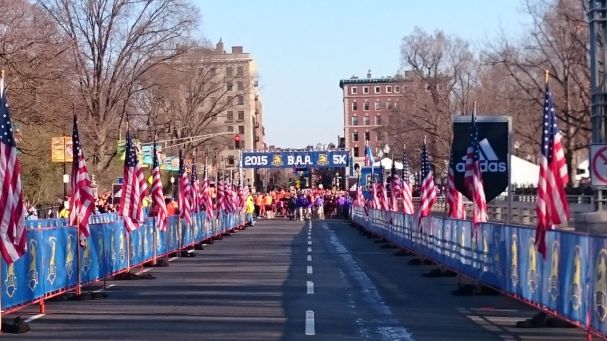 I was awake before my alarm and up and about before our breakfast arrived.  After some cereal and coffee it was just after 7am and time to head off to pick up my bib from the international entry tent.  The race itself started and finished between the Commons and the Public Gardens (which is a favourite spot of mine and also where Tom proposed ☺☺☺!).  It was a glorious morning – not too cold or windy and brilliant sunshine and blue sky ☺ (a big contrast to the marathon two days later where there was a crazy headwind and it was Baltic – poor Tom!!).

There were so many people around and the atmosphere was buzzing!!! After getting my number on I went off to do a warm up and the excitement was building!  At about 7.45am I got into my starting zone. These were based on your predicted mile pace (I love how in America everything is done in miles even when it’s a 5km or 10km race – I’m definitely a mile girl!).  This is where I met up with Jeremy from Metro who was also doing the 5k and had arrived the evening before.  After a quick chat they started bringing us forward to the start line.

I must confess I tried to stand roughly halfway between the 5 min/mile and 6 min/mile signs but gradually ended up pushing more towards the front (this always seems to happen when i line up for a race!)  They played the National anthem which always seems to get me pumped and then then gun went!  Before this race my PB was 17.34 at the Aberdeen Parkrun where I was pretty much running on my own and hadn’t tapered in preparation so I was hoping to dip under 17.20, and for this I knew my pace needed to be 5:35 min/mile.  I felt like I was in PB shape so figured I’d just set off targeting that and see what happened.

In a 5k my first mile is usually my fastest because I like to race and get carried away when the gun goes without even knowing it but for some reason this didn’t happen here and I went through the first mile in 5:32.  This was fine as it was still under the target pace but I was expecting it to be slightly faster, thinking that I’d probably slow during the last mile.  The second mile had two underpass sections in it which don’t sound like much at all but felt like surprisingly big hills at the time – just enough to test the legs and make you work a bit harder.  As a result my second mile was slower at 5:40.  I knew then that I needed to push the last mile if I was to reach my target, so I did, and it hurt!!  But then I knew that if I wanted to get the time I was aiming for, it was going to hurt! 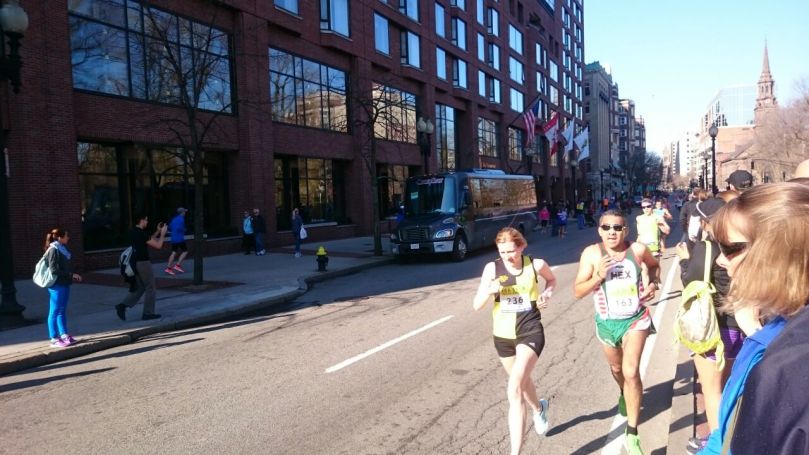 Luckily the last mile goes down Boylston street and over the marathon finish line (pretty inspirational) and as it turns out is ever so slightly downhill (I’d never noticed this before but was very happy to realise this during the race!).  I looked at my pace quite a bit at the start of that mile which at times was showing 5.14 min/mile – I didn’t believe this and put it down to that fact that the signal was messed up with all the surrounding tall buildings so I just had to go on feel and push hard, not really knowing what the pace was.  After a while I realised that I was gaining on a female in a crop top and knicker shorts – I took this as a good sign as she’d only be wearing that if she was fast!!  So I used her to try and pull me on.  Just before the 3rd mile marker I saw Tom which gave me a final boost before turning the corner to the finishing straight.

At this point the crowd was deafening, there were so many people!!  For a 5k!!!  It was amazing!  I crossed the line after an attempt at some sort of sprint finish and stopped my watch and saw 17.08.88.  I thought I’d feel amazing but I was just confused!  I thought it might be a push to dip under 17.20 so to go 10 seconds faster than that seemed a bit crazy – I didn’t really know how I’d done it!?  After the disbelief subsided and I realised I had actually run a big PB, I was delighted!! 😀  I’d lined this up as a target race ever since Tom got into the marathon and luckily all the preparation had gone to plan (well apart from the chocolate raisins, although I’m now starting to rethink those…maybe they’ve been holding me back this whole time!?) and now it was time to enjoy being back in Boston, eating burgers and drinking Sam Adams (Summer Ale for me!) and getting wrapped up in the marathon buzz and supporting Tom (which I suppose was the main reason we were over!!).  As an added bonus, I was 13th female overall and both the men’s and women’s American 5k records went in that race so it was great to be able to say I’d been there too!   If you’re heading over with someone who is doing the marathon or just fancy a great (if slightly expensive!) 5k, I’d definitely recommend it!! 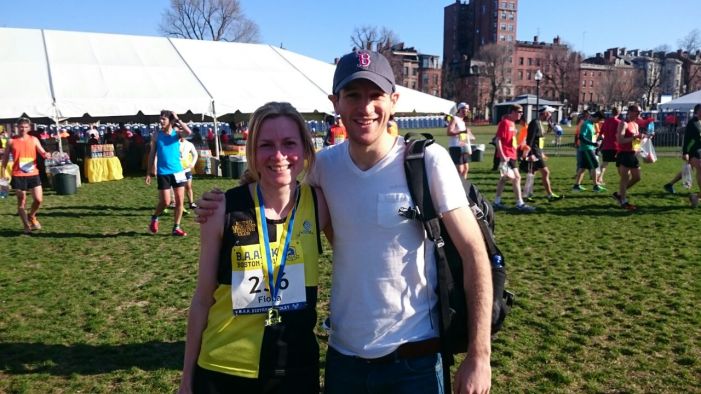 I love Boston and I love racing in America.  I’d actually done the 5k race before in 2013 when I lived in Boston.  In that year the 5k was the day before the marathon and actually finished on the marathon finish line.  Unfortunately, as we all know, the marathon in 2013 will be remembered for very sad reasons so it was great to go back for the marathon weekend this year and see how much the running community and Boston as a city has come together after such a tragic event.  I wasn’t even doing the marathon but got so swept up with the whole atmosphere from runners and non-runners alike that I found myself wanting to do it, wanting to be a part of such a special race that the whole city was behind (and I usually don’t like racing further than 10k!).  Although having said that, I then realised I would have to run another marathon first to try and qualify which would be tough, and when Marathon Monday came around, I had such a great time spectating and supporting Tom that I decided maybe it’s best if I just stick to 5ks and supporting him in the marathons for now…plus I hear New York has a fast 5k…! 😉

I don’t think my description does justice to just how phenomenal the atmosphere was the whole weekend.  You could feel the anticipation for Marathon Monday building even before the 5k!  I could probably write a whole new piece on the spectating experience!  Whether you were a runner or not, the marathon was all that was being talked about (well apart from me who was also talking about the 5k ;-)).  I think this should definitely be on your list for next year Debbie (forget Chicago!! Or maybe just do both?!) and for anyone else that has the qualifying time!  And this is coming from someone who didn’t even run the marathon!!  And if marathons aren’t your thing then the 5k is awesome!  I’ll definitely be doing it again when Tom goes back to run the marathon in nicer weather with a tail wind!! 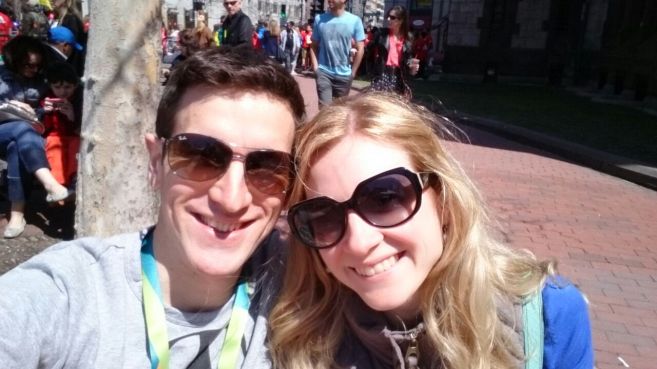