Positive: Taught myself how to ride a TT bike during a race. That’s probably it.

Negative: Shocking run while being terrified of learning how to ride a TT bike during the race, among many others.

Preparation for this race was better than most. I had a couple days taper, extra sleep and was feeling ok. Or was it? Considering I was only sent my Planet X TT bike last week, and I have NEVER used tri bars in my life, perhaps preparation could have been better.

The bike’s 1st outing (Suggestions for names? I was thinking Venus: Planet X is a planet, and women are from Venus. Venus is a good athlete. I like it.) was at Port of Menteith for my birthday, where I played on the bike for half an hour on a flat straight section of road. I had only just mastered staying in the TT position for 10 seconds, before coming off and braking immediately. To me it was/is terrifying being that low down and unstable. I am the definition of unstable. People tell me I need stabilisers all the time!

Anyway, the 2nd time was after I visited Steven at Holburn Cycles. He was awesome and fitted the bike a little better and adjusted the TT bars so I could reach the gears (I hadn’t managed this previously). I did 45 minutes on the turbo spinning my legs easy.

The 3rd time was with Keith on Friday lunchtime i.e. the day we left for the weekend, where I was unsure if I would even take the bike! He took me on a loop around a residential area, where the slightest incline made me nervous and I would resort back to the hoods. About 10 minutes in, I attempted changing gears, but it would make me swerve to the wrong side of the road. We then ventured to a straight track where I got scared as soon as I saw a person or dog within a 50m radius, incase I hit them. I was overthinking and panicked the whole time. Planet X had been so kind as to speed up delivery so I could use it for the race, and I had to learn pretty quickly anyway considering my race plans, but I had zero confidence. All I had done was ride outside in the tri position for maybe 2 minutes in total; the turbo doesn’t really count. Was I being stupid taking this bike to Stirling…?

So you can imagine my mindset when we get down the road and I have a flat tyre. On top of everything else.  And I hadn’t bought spare inner tubes that fit my new race wheels yet.

I tried to put it to the back of my mind, because Kyle and I actually stayed in Glencoe on the Friday night (we had booked this ages ago) and had an awesome night with a slap up meal, wine and Monopoly until midnight (he won – at least one of us won something!)! The weather was horrendous (50mph winds and horizontal rain) so that kinda sucked considering we couldn’t see the gorgeous mountains around the hotel. 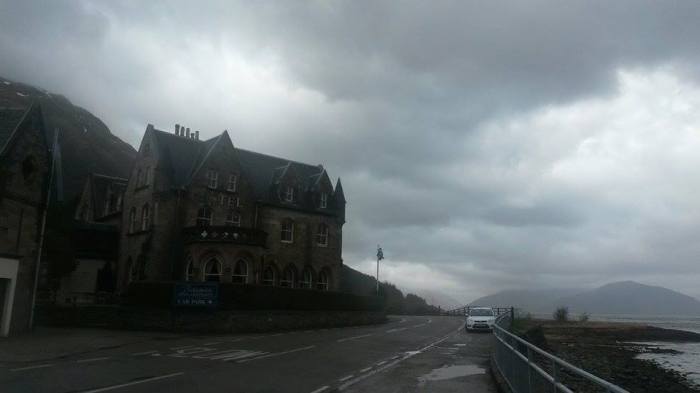 (The hotel looks haunted in the fog!)

(The view from our hotel room!)

This made us leave for Stirling earlier than expected on the Saturday. I managed a 3 mile run by the hotel (the wind made it fun!), then we packed up with the intention of finding a cycle shop. I picked up a couple of tubes from a shop in Stirling, then realised I hadn’t brought tyre levers (why does cycling involve so many extras?!), so after checking in, I dropped injured Kyle off at a nearby pool (poor guy was driving for hours next to his stressed out bird and needed to get a workout in) while I went to Halfords to buy some levers. A lovely man in the shop offered to change it for me if I had a pump in the car (sometimes playing Damsel in Distress works wonders!) but a) it was back at the hotel, and b) I need to learn this at some point – why not now!?! (Thank you anyway, kind Sir!)

I did a recce of the course (I wasn’t planning on cycling in those conditions anyway!!) then picked up Kyle, quickly had some lunch (and by lunch I mean coffee, cake and gelato), then headed back to the hotel to change this tyre.

THREE HOURS LATER, it was fixed… can’t see me making Kona if that’s the time it takes me. Oh, and the fact Andy, his kids, AND Kyle were all helping me! Ugh, at least it was finally sorted.

In the evening, Phil and Laura (who WERE hardcore enough to cycle the course!) met the 5 of us for dinner and it was great to hear all their stories!! They have some hardcore races this year that they will smash! I love hearing about the trips and races other athletes are going to, and how their training is going – it inspires me to keep motivated and keep training for my goals! AND they both did brilliantly!

Then it was an early night as the clocks went forward and registration was already early enough at 7.30am! We followed Phil and Laura to the event, Kyle went back to bed, and I registered and set up my stuff at transition. Time flew by, I managed a light warm up with a couple of strides (while spotting a couple of walks of shame – well it is a university campus after all!) and listened carefully to the race briefing. 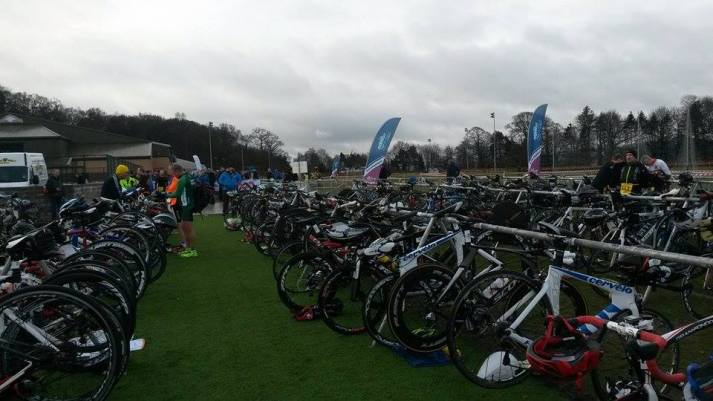 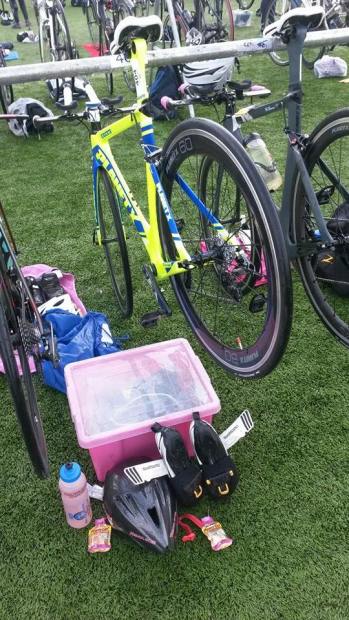 (My bike certainly stands out in transition! Loving the dark clouds and rain!)

Soon enough, we were off! Then BOOM – “The Edge” falls flat on his face! He more than made up for it on his killer run though – and he finished in 7th so great way to start the season! The run course was muddy and had a killer hill to get up 4xtimes in the 10k (which I believe was 10.3km?). I realised I was MAJORLY overdressed after about 2.5 minutes (3 layers of tops, a pair of shorts with thick leggings on top, a buff, 2 pairs of socks and 2 pairs of gloves), anticipating I would be FREEEEEZING on the cycle. In hindsight, I should have just put on more layers in transition (The Ribble Valley 10k was -3C and I was in tiny shorts and a tank top). Oops. This slowed me down. So did THAT hill (must.work.on.hills), but the major thing that affected my SHOCKING run split, was my mentality; I was focussed more on the dreaded cycle, and how the heck I was going to manage it, throughout the entire run. For example, when I hit lap 1, my head was saying “in 3 more laps you have to ride that scary bike”. Going up the hill, my head was saying “don’t push too hard – you’re already going to embarrass yourself on that flashy bike you can’t ride, so try and have fresh legs m’kay”, and so on.

In transition, I took some water (I was SO HOT), and a gel, then got going. No issues. I turned my shoes and helmet so that the rain wouldn’t get in them. Good thinking, Debster. I can add that to my “positives” above.

It took me about 2 minutes to psyche myself up to get on those bars. I waited until I passed a couple of roundabouts then the adrenaline kicked in and I forced myself to man up. I even changed gear and managed to keep up with people! Then came another (there were several) roundabout, where I slowed down far too much – overthinking gear changes and braking – so I lost the cyclists I was trying to keep up with. It’s these kinds of skills I REALLY need to improve on! 2 ladies passed me in the 42km course (one being the amazing Ashley Pearson – she can FLY on the bike!), but I did pass 2 guys, so all confidence wasn’t lost! During the 2nd loop, the wind and rain really hit hard, and I was suffering a lot (need to learn to drink/take gels in the TT position!), but i powered through and made it to transition in 1 piece (what I was worried about ALL WEEK!)

It took a while for me to change into my trainers again because I couldn’t feel my feet, then I took a gel and headed out on the course. My legs were numb so I just went for it and hoped for the best! Going up that hill again, I overtook a couple of guys that were on their 2nd lap (booo!) so that kept me motivated, and I started picking people off. I think I pushed the downhill too hard because the feeling in my feet finally came back after about 10 minutes and I was in pain!! I had to have mental words with myself to NOT walk up THAT hill the 2nd time! With about half a mile to go I saw one of the girls who had overtaken me on the bike, so I pushed hard to try and catch her (Ashley was probably finished by this point!). Unfortunately, I left it too late and she beat me by about 20 seconds overall. The mud (it was EXTRA muddy by this point after all the rain and trampling!) and hills had zapped my legs and I had to settle for 7th.

Kyle, Andy and his kids were waiting for me at the finish line and boy was I happy to see them! I was majorly disappointed in my runs, especially the 1st one, but I was pretty proud of myself for how I handled myself both mentally and physically on the bike!

Overall time: 2.29.42 – 7th at the Scottish Championships aint bad I guess. But I know I have SO MUCH TO LEARN and improve on!

After a long, WARM shower, I changed and we all went for pizza and a  hobble up to the Wallace Monument (I was broken but those kids are FIT!! In a few years they will be beating this hill running bf of mine 😉  ). 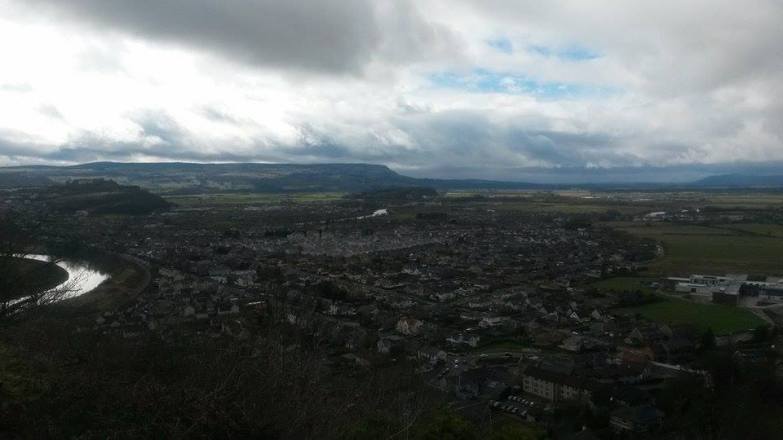 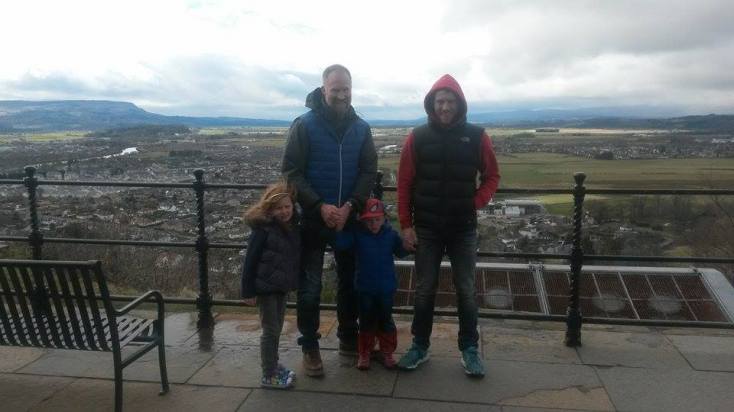 Thanks for being my cheerleaders, guys! I had such a fun weekend! But I must say I am a broken woman today! Oh my neck!! Race pics to follow!